Train from Lisbon to Sintra 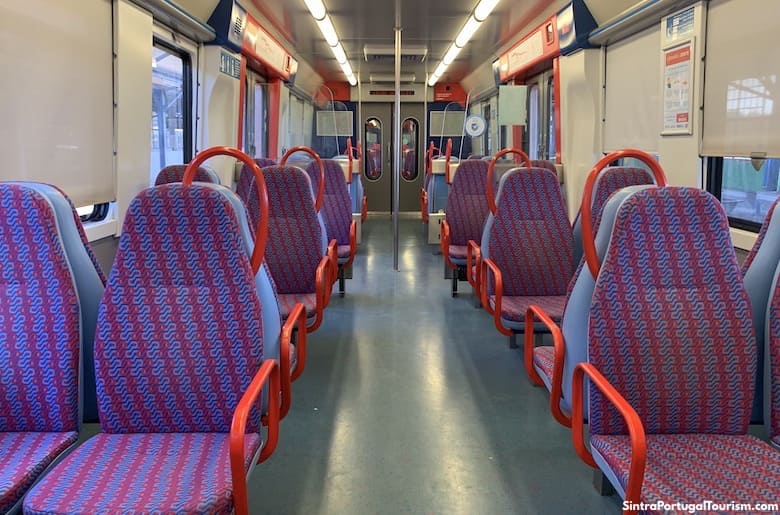 Inside a CP (Comboios de Portugal) train, which links Lisbon and Sintra, Cascais and other suburbs

Sintra is around 40 minutes by train from the center of Lisbon. It’s the final stop of two train services in the capital -- one departing from Rossio Station downtown, and another from Oriente Station in the Parque das Nações district to the east, close to the airport.

Rossio-Sintra Line - It's more convenient for those staying in the city center. Rossio Station is within walking distance of just about anywhere in Baixa, Chiado, Alfama, and Avenida da Liberdade, but can also be reached by metro (green line).

Oriente-Sintra Line - It stops at other stations in Lisbon connected to the metro network. They are Roma-Areeiro (on the green line), Entrecampos (on the yellow line), and Sete Rios (named “Jardim Zoológico” on the blue line). This service is more convenient if you’re staying in the upper districts of the city, close to these stations.

Access to the platforms in Rossio Station, for the train to Sintra.

Single tickets for both Rossio-Sintra and Oriente-Sintra cost €2.25, and can be bought at the ticket counters or machines. The tickets are magnetic cards called “Viva Viagem,” which you need to purchase the first time you take the train in Lisbon. In future journeys you just have to recharge it. It costs €0.50, so if your trip to Sintra is the first time you’re taking the train in Lisbon, the total cost will be €2.75, and for your return to Lisbon you just need to add a single trip ticket to the card (for €2.25). There are no return tickets, so to go and return you’ll have to buy two single tickets.
It’s important to note that if you previously acquired a “Viva Viagem” card to use on the metro or trams, it can only be used for the train if it has no fares left. Your balance has to be zero, otherwise you must buy a new card for the train. The card is valid for just one person, meaning everyone in your group will need their own.

Those with the Lisboa Card (the tourist pass) can ride the Lisbon-Sintra trains for free, as many times as they need, for as long as the card is valid (it’s available for 24h, 48h and 78h periods). There’s also a 24-hour train ticket that provides unlimited travel for €6.00, but you’re better off investing in the Lisboa Card instead, as it also offers free or reduced admission to most attractions in Lisbon and a few in Sintra. This 24-hour ticket would also be worth getting only if you were taking three or more trips, which tourists rarely do, unless they’re stopping in Queluz for its palace between Sintra and Lisbon.

Before you step on the train, you must validate your ticket by scanning the card on the scanners by the platforms or ticket machines. Make sure you keep it handy throughout your journey for an eventual inspection and because you’ll need it to exit the station at your destination. 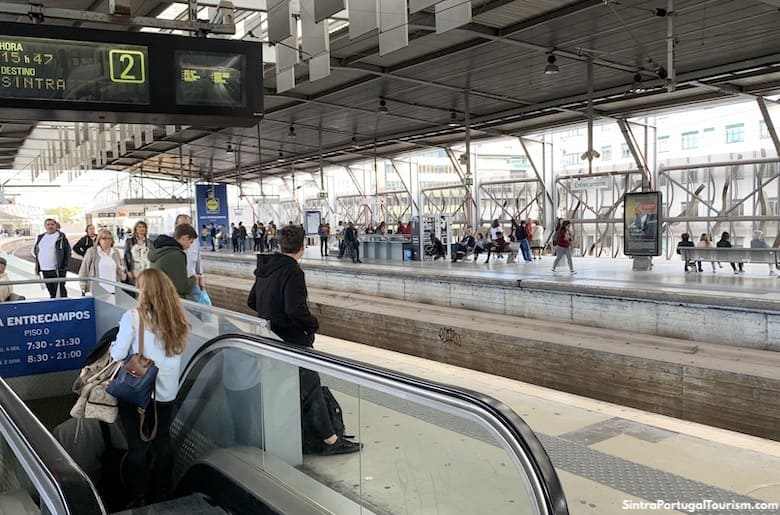 Entrecampos station, which is a stop on the Oriente-Sintra line.

The train service to Sintra is operated by CP (“Comboios de Portugal”), which is the national train company. It’s a busy commuter line, so seats can’t be pre-booked and there are trains every 20 minutes, and more frequently at rush hours. The Rossio-Sintra journey takes 40 minutes, and the Oriente-Sintra train takes 47 minutes. Since most tourists depart from Rossio Station, expect long lines and waiting times at the counters and machines. The only way to avoid them is to get the Lisboa Card.

It’s generally safe to take the train in Lisbon, but as this is a busy line with lots of tourists, beware of pickpockets as you would anywhere else. To avoid petty crime if you’re traveling alone or late at night, sit in the most crowded carriage, away from any dodgy-looking passengers.

There are commuter buses to Sintra from Lisbon, but they take much longer than the train, and the terminals are not conveniently located for tourists.
Driving to Sintra is also not recommended, as there is very limited parking and the narrow hilly roads are constantly jammed (and they’re often nerve-wracking experience for those not familiar with the place).

Once you arrive at the Sintra train station, it’s a fast and easy walk (about 10 minutes) to the center, where you see the National Palace. However, it’s recommended that as you exit, you turn to the front of the station (the side parallel to the train tracks), for the buses to the palaces, especially if you want to visit Pena Palace. For complete details, see the 434 bus guide.