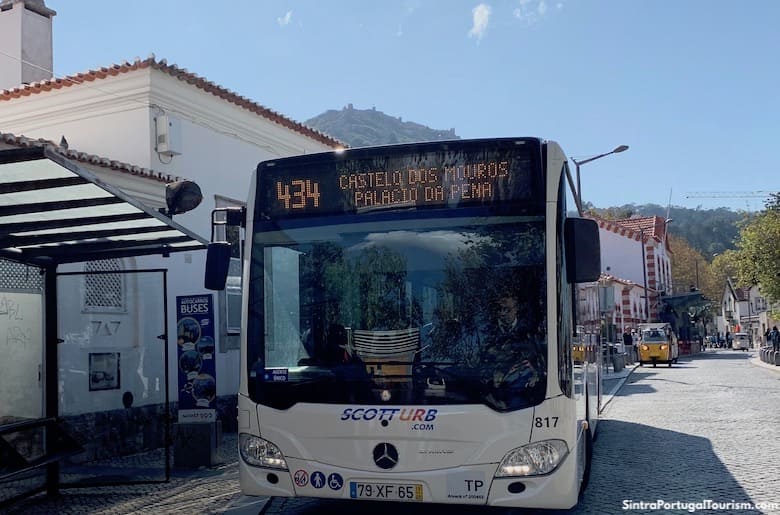 The 434 bus outside the train station

Pena Palace and the Moorish Castle are located at the top of a mountain, so unless you’re a fit hiker with plenty of time, you’ll need to take a bus to visit these monuments. That bus is number 434, which departs from outside the train station in Sintra (you’ll see buses lined up outside, parallel to the train tracks).

The 434 of the local Scotturb company passes through the center of town, and the last stop is Pena Palace (it stops at the Moorish Castle just before it). Its route is the following:
Sintra Estação (Sintra Station) > São Pedro de Sintra > Sintra Vila (National Palace) > Castelo dos Mouros (Moorish Castle) > Palácio da Pena (Pena Palace)

Due to the narrow roads, when the bus departs from Pena Palace it does not go back to the Moorish Castle. It goes straight down to “Sintra Vila” and terminates at the station.
If you want to visit both the Moorish Castle and Pena Palace, get off at the castle stop, and then walk up to the palace (it’s about a 10-minute walk).

There is also a “turístico diário” (a “day tourist ticket”) or "Hop On Hop Off All Buses" ticket for €15.10 that allows unlimited rides on all Scotturb buses on the day of purchase. That includes not just the 434 bus, but also the 435 to Monserrate Palace, and the 403 to Cabo da Roca and Cascais, all departing from outside Sintra station, plus the buses to the beaches departing from Portela de Sintra station not very far.

At the train station in Lisbon, you may also acquire a “Train & Bus” ticket at the ticket counter for €15.90. That ticket allows you to travel on the Lisbon-Sintra train line and on all the Scotturb buses in Sintra and Cascais on the day of purchase. This isn’t a very popular option, however, as most tourists buy the Lisboa Card, which already allows free unlimited rides on the Lisbon-Sintra and Lisbon-Cascais trains.
All tickets are purchased from the bus drivers, except for the “Train & Bus” ticket.

The only way to reach Pena Palace and the Moorish Palace besides taking bus 434 or hiking, is taking a taxi (which can be expensive) or joining a tour. You should never drive in Sintra, as there are almost no parking spots in the center or near the attractions. Navigating the narrow uphill roads can also be challenging to those not familiar with the place, and there are constant traffic jams.

The 434 departs every 15 minutes, from 9:15am to 7:50pm in the summer and from 9:30am to 6:20pm at other times of the year. It takes less than 15 minutes to reach the Moorish Castle, and if you want to go straight from the station to Pena Palace you’re there in less than 20 minutes.

Booking Deals - Book now and save up to 70% of regular rates.